We look forward to welcoming you at our winery, to meet you in person and to offer you an unforgettable wine experience…

2017 harvest started a week later than in 2016, meeting the average starting date of the last decade in Santorini. The grapes matured on time leading to the following calendar:

All varieties from all the plots were handpicked and transferred to our winery by 25 August.

Weather conditions during the year:

Overall, the sufficient rainfall during the year had offered great energy to the vines. The cold winter led to a later flowering and berry growth. The rain contributed to the excellent vitality of the grapes. The initial predictions were talking about a production reaching the average volume recorded in the island. However, the heatwave in late June – beginning of July negated the earlier estimations, fortunately without any impact on the quality of the unaffected grapes. Until harvest time, the gentle winds together with the lack of humidity were beneficial to the maturation of the grapes leading to concentrated, healthy fruits. Sugars maintained a relatively high level per variety, yet with no extreme increase in alcohol content. 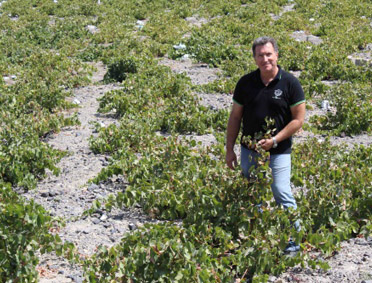 The vitality of the grapes was exquisite this year thanks to the conditions during wintertime. Unfortunately, the growth cycle was interrupted by the extreme heatwave in late June that affected a significant part of the crop; grapes were sunburned and consequently dehydrated. The outcome was a decrease in the volume of the total production, which luckily did not have an impact on the quality of the grapes left.

It must be pinpointed that the damage could have been greater if not for the traditional “kouloura”; the basket-shaped pruning method applied by the local vine growers had safeguarded the grapes to a significant extent, proving their huge importance especially in the extreme conditions frequently met in Santorini.

Winemaking and estimations for the quality of 2017 vintage:

So far, the vintage meets the potential for high quality wines. While fermentation is almost done in all tanks, the results are very good.

2017 Santorini wines are expected to be intensely aromatic and pleasant.

The alcohol content varying from 13.5-14%, the total acidity, which depending on ripeness degree is estimated to range between 6.4 – 7.0 gr / lt (expressed in tartaric acid)-, and the pH level between 3 – 3.2, indicate a vintage with high ageing potential.

2017 vintage is special for SantoWines as it coincides with our 70-year anniversary.