We look forward to welcoming you at our winery, to meet you in person and to offer you an unforgettable wine experience… 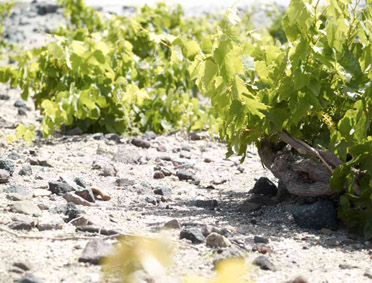 This year's harvest in Santorini was the earliest at all times. It started ten days earlier compared to the decade’s average. The lack of rain, mainly in spring, increased the precocity and caused slight stress on the plants.

The grape maturation led to the following harvest calendar:

All varieties from all the plots were handpicked and received at our winery by 17 August.

Weather conditions during the year:

Spring: Warm, almost no rainfalls in its entirety (4.6 mm). The vines flourished and set the fruit early. The lack of the usual winds for our region led to a smooth growth of the stems. Regular fruit setting , without any issues.

Summer: Typical of the Cyclades islands, without extremely high temperatures. Gentle winds followed at the beginning of July (until the beginning of the harvest) with lack of humidity, which accelerated the ripening of the grapes. No  heatwaves occurred.

Overall, it was an extremely dry year. Despite the initial ambitious predictions for production reaching the average volume recorded in the island, the drought did not allow vines to yield 100% of their potential. The lack of humidity was beneficial to the maturation of the grapes leading to concentrated, healthy fruits.

From the beginning of the harvest until the end of July, southern winds, as well as high atmospheric humidity, have been slowing down the maturation process. Typical weather conditions, which returned by the 1st of August, together with the gentle north winds helped the grape maturation. Until the end of the harvest, sugars maintained a relatively high -though sufficiently- level per variety, so there was no extreme increase in alcohol content.

The volume of production was affected by this year's drought combined with the lack of rainfalls in the previous years. The yield per hectare was very low, and the size of the berries  remained small. The total 2018 production reached 1.900 tons ,45% lower compare to the average Santorini production.

Winemaking and estimations for the characteristics of 2018 vintage:

This year’s vintage meets our expectations for high-quality wines. While fermentation hasn’t finished yet, the results seem to be very good.

Bouquet of white flowers, citrus like lemon and grapefruit, and white-fleshed fruit like banana, melon, white peach and pear.

Crisp acidity on the palate  combined with the trademark Santorini minerality.(flint , crushed stones and oily notes)

Rich and full body with intense and well delineated  flavours. The low  yields and the small berry size produce intense and concentrated wines  with high acidity, enhancing the unique mineral character of Santorini.

The alcohol level  varies  between  13-14.5%, the total acidity which, depending on the ripeness degree, is estimated to be  between 6-7.0 gr / lt (expressed in tartaric acid), and the pH level ranging between 2.9-3.2, ensure a vintage with high ageing potential.